Asgard by clint around the application store 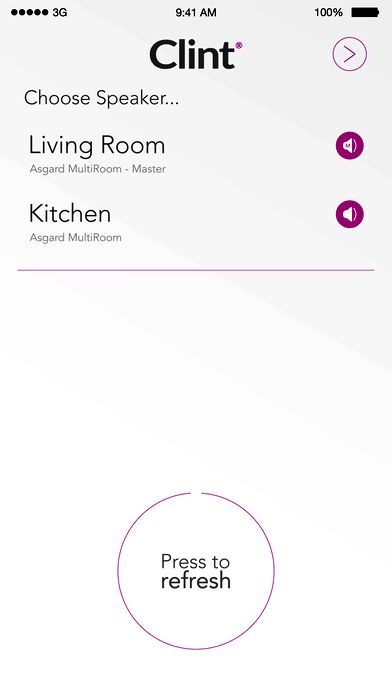 The Asgard Application from Clint provides you with full charge of your Asgard Wi-Fi loudspeakers.

*Configure the settings of the Asgard loudspeakers.
-You are able to setup network connection for the wireless loudspeakers.
-Relabel your loudspeakers (SSID) to e.g. match their placement like
Kitchen, Bathroom, Office etc.

*Take control of your loudspeakers.
-Adjust each speaker volume individually.
-Control and adjust the EQ settings for every speaker (Bass, Mid, Treble).
-Setup loudspeakers for MultiRoom (WHA) support (DLNA only).
-As much as 4 loudspeakers can set into Party Mode (MultiRoom) so that you can enjoy
music on your home.

*DLNA Player
-Fully DLNA supported player included in our Clint Asgard Application so that you can
playback shared music from network devices for example NAS drives, Computers,
MACs or any other supported media servers, along with the local music stored in your device.
-Fully benefit from the MultiRoom (WHA) functionality in our loudspeakers by utilizing DLNA playback.

*NOTE
Please make certain you have the most recent firmware
placed on your Asgard loudspeakers, to make sure full
functionality and compatibility with this particular Application.
To learn more regarding firmware update
check out : www.clintdigital.com
or look into the firmware from inside the Asgard by Clint Application.

Daniel Herbert: Affinity designer is amazing and the affinity photo is just as good but it acts just like photoshop I would recommend it alsohas no subscription !﻿

Firstname Surname: 3.99 for that?! are you fucking kidding me?﻿

Homeless_YT: NK YT not really, you can get a custom PC, which runs 10x times better than a Mac for less than the price of a Mac﻿

Antonio Lyles: would you recommend affinity designer for thumbnail designs?﻿

Omar Gutierrez: If you are going to use Affinity Designer for just YouTube video thumbnails—no. Affinity Designer is mainly for people will be using it for graphic design, drawing, logos, etc. I would honestly recommend Pixelmator. Not only is it cheaper, easier to use, simpler and you can still accomplish a lot with Pixelmator (e.g., crop, titles, layers, effects, warp, etc.). if you're going yo use it for other things then yes! I would argue that will be a great fit for your—if you're willing to overcome te learning curve. You can always download the free trial on the Affinity Designer website.﻿

Murchy Murch: Bumpr is "ok" if you want something good get Choosey (www.choosyosx.com) which allows you to set rules. Choosy isn't on the Mac App Store but who cares? Pastebot is a good app but it does not have an iOS counterpart. I'd recommend Copied (www.copiedapp.com) which offers a Universal iOS app and Mac app with lists, templates and formatting options. I own both programs and Pastebot has a lot of nice little touches but no iOS app makes it hard to use in a daily workflow.﻿

Mr. Luigi: Murchy Murch Hi Muchy, I decided to buy Choosy based on your rec. It installed nicely on my iMac, but failed to install on my MacBook Pro. I kept on getting a message "can not load preference pane." I did a search online and found other users having the same problem. I wrote the developer. He did not respond despite waiting over a week. I tried contacting again. Still not a peep. I would caution anyone considering Choosy to learn from my experience. Such poor customer support is inexcusable. In the end, I purchased "Browser Fairy." It only costs $5.00 and can be purchased from the Mac App Store. I have now installed it on our 4 Macs at home (Mac Mini, iMac, MacBook Pro, MacBook Air) and it works perfectly.﻿

Murchy Murch: I hate that. For the record I was able to install the pref pane on an iMac and Macbook Air but there's clearly an issue with some Macs because you're not the only one reporting it. Regardless if someone sells a product they should support that product in a timely fashion. Although Choosey is a very flexible tool I cannot recommend it any further if the developer is non communicative. Let me know if he gets around to responding. Thanks for the heads up﻿