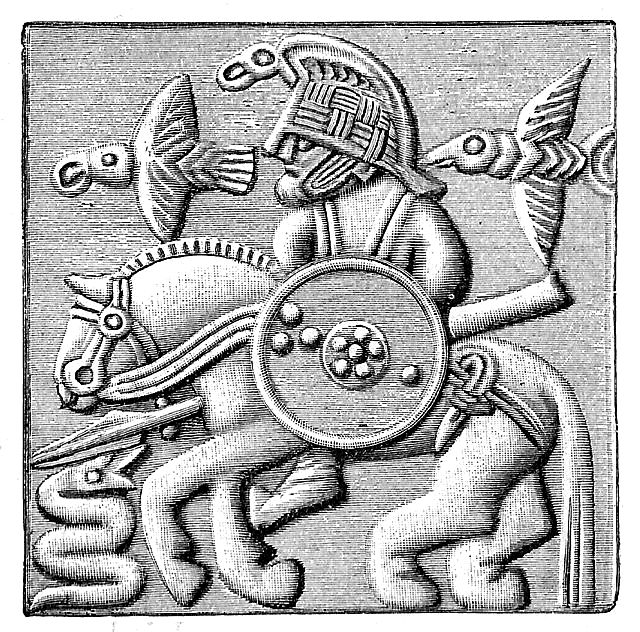 Odin is really a conspicuously pointed out god through the recorded good reputation for the Germanic peoples, in the Roman occupation of parts of Germania, with the tribal expansions from the Migration Period and also the Viking Age. Odin ongoing in to the modern period to become acknowledged in rural folklore in most Germanic regions. References to Odin come in place names throughout regions in the past lived on through the ancient Germanic peoples, and also the day Wednesday bears his name in lots of Germanic languages.

However this etymology doesn’t match the function that Odin or Vodan appear to possess initially had.

The first records from the Germanic peoples were recorded through the Romans, as well as in these works Odin is often known as the Roman god Mercury. The very first obvious illustration of this happens within the Roman historian Tacitus’s late first-century work Germania, where, covering the faith from the Suebi (a confederation of Germanic peoples), he comments that "one of the gods Mercury may be the one they primarily worship. In cases like this, Tacitus refers back to the god Odin as "Mercury"…

Mercury is really a major Roman god, being among the Dii Consentes inside the ancient Roman pantheon. He’s the patron god of monetary gain, commerce, eloquence (and therefore poetry), messages/communication (including divination), vacationers, limitations, luck, trickery and thieves he’s even the guide of souls towards the underworld.

You can observe how Mercury could be perfect deity for Vikings, participants, the vacationers and also the thieves…

As I was discussing Radegast (Welcome guest) and among my buddies, he advised me that certain of Odins names was "far travelled guest"…

This is extremely interesting.

In certain ‘languages’ of South Slavic languages word "od" or "hod" means walk. "odi" or "hodi" means walks and "oditi" or "hoditi" means that you walk, walking. "odi on" or "hodi on" means he walks, he who walks. Is odin = odi on = the one which walks, travels? It’s Interesting that in Greek we’ve word ὁδός (hodós) meaning threshold, road, path, way, journey, trip, expedition…The state etymology would be that the Greek word comes form Proto-Indo-European *sodos. Cognates include Old Church Slavonic ходъ (xodŭ) and Sanskrit आसद् (āsad). I wander when the Greek word really originates from South Slavic word "od, hod" intending to walk…The term "odos" (path) would then be something "od" walk on…"odaš, odiš" means that you are walking, "oda si, odi si" means he’s walking and "odao si" means that you walked, both meaning travel, trip, expedition, journey…

This fits perfectly using the the Roman description of Odin, Vodan as the same as Mercury, the traveller, messenger, guide…

But if this sounds like true, how come Norse god have name whose etymology originates from Slavic languages? Is that this only a coincidence?

Serbian Historian in the 1800s, Miloš Milojević, claimed that Serbs and Danes were the same people. This is extremely interesting since the latest genetic evidence is showing us that Serbs and Croats have majority I2a1 and also the Danes have majority I2a2 Y haplogroup. Essentially those are the nearest genetic cousins. You can observe this clearly from all of these maps printed on Eupedia:

Eat U Raw: fuck the christian church they are a money system took from us all the conection to humanity and mother earth ﻿

Toten: It's a shame that sources of Celtic myth and history feel the urge to mention Christianity or Rome, as though the Celts simply lied down and ceased to exist at the "glorious might of the Romans". Ignoring the fact that the Celts were liberated from Rome by fellow Barbarians.﻿

Toten: +Captain Shite Stain Not in regards to left-right politics, no. \n\nYou're making wild accusations based on no premise. \nThat's like replying "I don't think the invention of bicycles had anything to do with horses" with "OH SO YOU THINK BICYCLES SHOULD JUST, NOT EXIST!?"﻿

Tiffany Grove: Toten it is a shame I agree with you but I don't think we're the barbarians but truly the barbarians were the Romans and Christians who tried to force there beleafs on the celtic people's﻿

Toxophilus indomitus: "Celt-ic" is a name used by the greeks who called them "Keltoi" we don't know what they called their civilisation collectively and only have the names of the tribes, ie Parisi, Durotriges, Catevellauni, Domnonia etc, and these are Romanised versions of their tribal names.  Using the term "Celtic" is meaningless in an Historical context, much like calling all North American Natives "Indian".﻿

Microtherion: We're often told, especially since the late twentieth century when this point of view became fashionable, that 'Celtic' is a purely linguistic term and/or is somehow problematic, and it's a very strange idea, however widespread. Certainly 'Celtic' is a linguistic term – but then what else did anyone suggest it was? Germanic and Latin/Romance are also linguistic terms. Not all of those who spoke such languages called themselves Germans or Latins/Romans, just as not all Celtic-speakers (as far as we know) called themselves Celts, although it is pretty clear that the Gauls and the 'Spanish' Celts (Celtiberians) did. It isn't similar to 'Native American' or 'Indian' because that refers to many unrelated or distantly-related linguistic groups. It is precisely analogous, as I say, to Germanic, Slavic, Latin etc. The parallel with Native Americans would be to talk about Iroquoians or Athabascans etc – which would be perfectly correct. In my opinion, the whole 'problem' is largely political – it's a kind of academic imperialism. Unless perhaps someone were to suggest a more accurate name (and do the same for the Germanic, Latin and other peoples), the whole question is meaningless.﻿

Microtherion: +Nathan Reed – Exactly. Although I kind of like the term 'Native Europeans' – and sometimes use it ;)﻿

Serbian Irish: Gaulish chieftains from fourth and third century BC have names whose clear etymology is preserved in Serbian. Breton, Welsh, Irish, Lithuanian and Slavic languages are the only ones which share "vran" as a word for raven and crow, but only Serbian, Croatian, Bosnian and Polish languages use Vran, Vron as a word for black. Slavic languages are the only ones which have preserved the old word "Bran" meaning to defend, protect. How is this possible if Slavs and Celts were not supposed to have had any contacts?\n\nhttp://oldeuropeanculture.blogspot.ie/2014/04/bran-vran.html﻿﻿

Danilo Popović: +thatgirlshesfreaky The moment you sad 'your moms dick' all your words list credibility! I would suggest takcours basic history cours.﻿